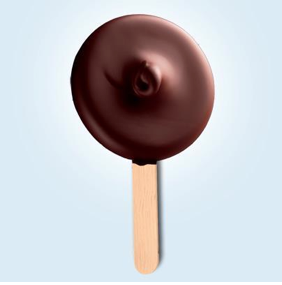 Mormons believe that everyone deserves the chance to be a Mormon and get into Heaven, including those who died before the missionaries could knock on their doors.  There are several prerequisites for Heavenly admission, one of them being baptism by immersion (full-body dunking under water); therefore, someone has to stand in for the departed person to meet that requirement.

Who gets to stand in for the departed? Pre-teen kids, of course! Twelve-year-old Mormon boys and girls are periodically asked to visit the LDS temple in their area to participate in “baptism by proxy” or as it is most commonly called, baptism for the dead. I actually looked forward to it as a Mormon girl, primarily because of the mystery surrounding the inside of the temple itself, but also because I thought I might really be communing with the dead. It’s a little creepy, I know.

The other 12-year-olds and I were required to be interviewed by the bishop of our ward to see if each of us was worthy of a “temple recommend”, which is mandatory to be allowed inside the temple.

Basically, the bishop asked me if I masturbated and whether or not I was paying 10% of my babysitting wages to “tithing” for the church.

The evening of the temple visit, all the girls piled into somebody’s mother’s huge Suburban and the boys piled into somebody’s father’s huge Suburban and we set off to be dunked for dead people. There is a lot of ceremony involved, as you might imagine; male temple workers escort the boys to the boys dressing room and female temple workers do the same with the girls. Once in the dressing room, we were each given a baptismal suit which was (and still is) made of a starchy, coarse, polyester blend that was engineered to be impossible to see through when wet and still be white. The fabric also works as an exfoliant. 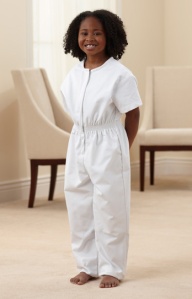 I recall my grandpa wearing a very similar outfit, but in blue cotton, whenever he worked on his cars.

Long hair had to be tied back, preferably in a braid, because if any body part, including hair, was not completely submerged in the water for the proper duration of time, the whole baptism would have to be redone. Considering that each kid is being dunked for numerous people, time is of the essence.

You may be wondering, who are these dead people being baptized by these Mormon kids?

Mormons are well-known for their genealogy work; they are gifted at generating lists of names from death certificates and they will also accept requests. (ICYMI: the Mormon church has been in trouble in the past for baptizing Holocaust victims.)

So, back to the baptism. There’s a large decorative tub called a “baptismal font” and in it stands a man who will be the dunker for the evening. 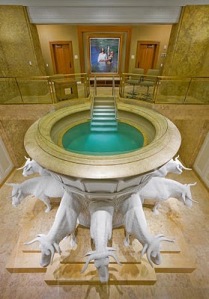 I distinctly remember standing in the lukewarm water with my arms intertwined in a strange configuration with the male stranger who was about to dunk me underwater repeatedly. Thankfully, I was allowed to pinch my nostrils closed. He recited the prayer and baptized me in the name of this woman and that woman over and over again. I kept my feet firmly planted on the floor of the font and didn’t let them float up in order to ensure complete submersion each time. It was a point of pride to get all my dunks perfect with no do-overs. (Mormon kids hassle each other about shit like that.)

Once the baptizing ended, we all headed one by one to the changing rooms to get dressed and ready for Confirmation, which is basically a “laying on of hands” prayer blessing that confirms the deceased person’s baptism and gives them the “gift of the Holy Ghost”.

Then we all went to the Dairy Queen across the street from the temple for DQ Sandwiches and Dilly Bars.